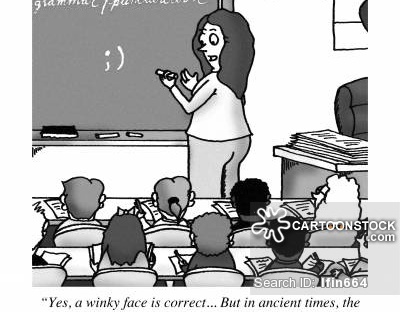 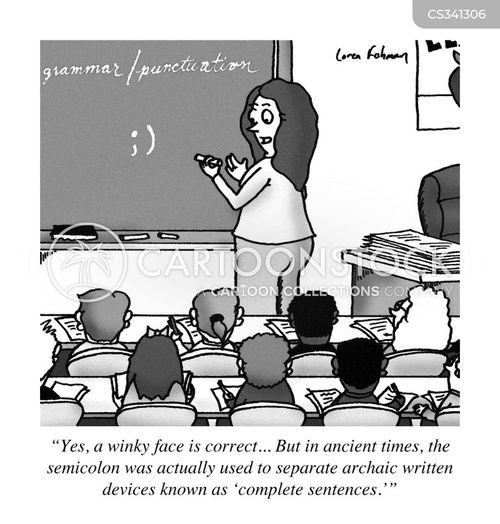 Does that little punctuation glare at you balefully from the keyboard, one dot like an eye angrily judging you for not using it enough–or is it for using it too often?

Worry no more! There are only a few reasons to use a semicolon, and here they are:

Ex. The concert was brilliant; the crowd gave the band a standing ovation.

Note: If you can also add “,and” between the two complete sentences, you can add a semicolon to join them. Remember that you need a complete sentence (subject and verb–someone has to be doing something) on either side of the semicolon in order to use it like this!

Ex. The Millenium Falcon blasted out of Mos Eisley with Obi-Wan Kenobi, the Jedi Master; Luke Skywalker, the untried farm boy; Han Solo, the scoundrel; and Chewbacca, the hairy co-pilot on board.

Note: Without semicolons, that list gets weird. You’d have Obi-Wan, another Jedi master, Luke, some other farm boy, Han, some other scoundrel, Chewie, and some other hairy lifeform on the Milennium Falcon–and YT1300s just aren’t that big! Use semicolons to break things into chunks (like you would in a list of cities and states: I have lived in Chicago, Illinois; Tampa, Florida; and Las Vegas, Nevada.)

Ex.  The Force only works on the weak minded; for example, the stormtroopers whom Obi-Wan tricks into thinking their droids weren’t the ones they were looking for are easily fooled.

Note: When you use a transitional phrase between two complete sentences, you put a semicolon before the word(s) and a commas after it (them).

Ex. The cantina was filled with alien life forms; however, the two droids were not allowed inside.

Note: This is the same rule as above, but most grammar books will distinguish between transitional phrases and conjunctive adverbs–and they are right to do so! These things are quite different…but not when it comes to semicolon usage. When it comes to punctuation, they often behave the same way.

So that’s it. The semicolon is not a super comma. It’s not used to show a contrast or to slow the reader down (dashes are great for that!). You only have four reasons to use it–three really if you lump #3 and #4 together.

Feel free to glare back at that little key all you want. Now you know when to call it into play.

2 thoughts on “Semicolons: It’s more than just a wink!”

How does it work?

Interested in some editing? Send an email through the “Contact Me” tab. Please include what type of editing you are looking for as well as a brief description of the project (purpose, page count, etc.). I also ask for a random page of the document that you feel needs some editing. It can be any page—I just need a sample! You can cut and paste it into the comments box or email it to editorjmpaquette@gmail.com. I will reply with a quote, an estimated turnaround time (ranges from 24 hours to 4 weeks, depending on the project), and the sample page with the editing style you requested so you can see what kind of work I do. I generally make all changes using Word’s Track Changes so that you can choose to accept/reject my edits as you like. If the cost and timetable will work for you, send half of the payment through PayPal. Upon receipt, I will begin working on your project. The rest of the payment is due after I send the edited document to you.

One Sticky Note at a Time

Book Two is ready for Pre-order!

A Murder of Crows

From the Editor’s Desk